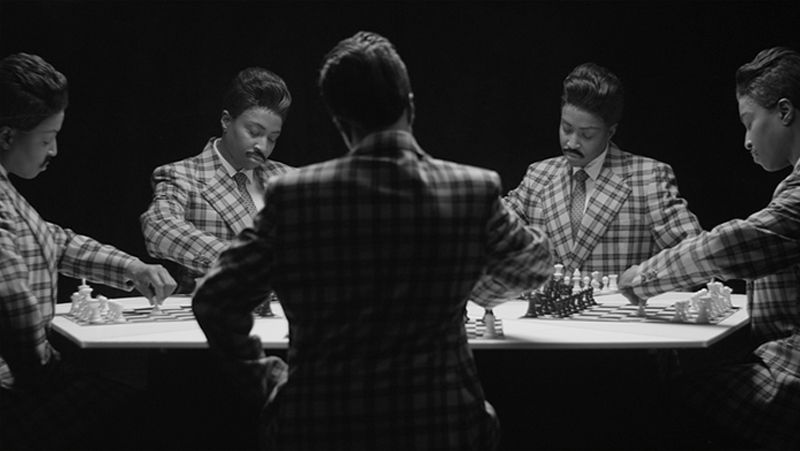 Lorna Simpson shares an original poem, "We Have Been Whispering In Each Other's Ears For Centuries", inspired by recent protests of the Black Lives Matter movement with New York Magazine, June 9, 2020.

"Artist Lorna Simpson Is Turning ’50s Ebony Magazine Portraits Into Heavenly Collages Under Lockdown" by Hayley Maitland on "Give Me Some Moments" exhibition in Vogue UK, May 4, 2020.

'Give Me Some Moments' Lorna Simpson's solo online exhibition, Hauser & Wirth May 1, 2020.

“They are creative visionaries whose passions and work have shaped the cultural landscape.” - Lorna Simpson captures a series of portraits of American women in the Arts on Vogue.com, launched March 5, 2017.

"What Simpson witholds is certainty. The certainty of familiar visual tropes and textual sequences; the certainty imposed and incited by race, gender, and class histories" by Margo Jefferson for Aperture Magazine special issue on Vision and Justice, May 2016

Lorna Simpson’s work was included in a virtual exhibition of the Venice Biennale selected by La Biennale di Venecia and Google Cultural Institute. The exhibition is a new online platform through which viewers can access a digital version of all pavilions and specials exhibitions of the Biennale.

"After we summited the ridges high above Aspen in late July of this year, the artist Lorna Simpson and I finally had the occasion to speak at length" - A Photographic Memory: In the Studio with Lorna Simpson by Joseph Akel in The Paris Review, October 15, 2015.

"With their hazy washes of graphite and ink, the paintings depict isolated figures in nebulous spaces—yet Simpson somehow ensures that these figures always appear to be concrete individuals, however inscrutable, and not abstractions. The paintings are somber, yet with an inner vitality that feels indomitable." - The 2015 Venice Biennale by Barry Schwabsky in The Nation, July 2, 2015.

"The contrast between the real (the Ebony magazine photograph cutouts) and the imagined (Simpson’s sensational hairstyles) acknowledges hair not simply as a site of individuality, but as a site of control in culture at large." - Salon Style by Simone Krug in the Brooklyn Rail, June 3, 2015.

"Lorna Simpson deconstructs racial stereotypes in her large-scale paintings displayed magnificently on the walls of Arsenale." - Okwui Enwezor's All the World's Futures: A Call to Action by Otona Damachi in Ours Magazine, May 13, 2015.

Lorna Simpson, makes its American debut after traveling in Europe at the Addison Gallery of American Art on September 20, 2014 in Andover, Massachusetts.

Regarding the Other: Lorna Simpson at the Haus der Kunst, ArtMag, 2014.